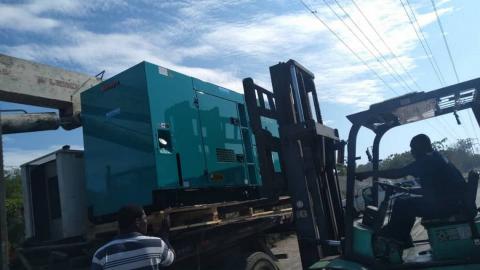 Pregnant women and newborns in desperate need of neonatal care in Haiti’s southern region once again have a place to go for medical care. The Sainte Croix Hospital in Léogâne, which closed its doors last week after a violent gang hijacked its new $38,000 generator while it was being delivered, is accepting patients once more, thanks to the generosity of Miami Herald readers. “Tomorrow, bright and early, we will start receiving patients,” the Rev. Jn Michelin St. Louis, director of the hospital, said Thursday after inspecting the installation and function of a new 125-kilowatt generator that was delivered earlier in the day. “

We were really sad about having to close the hospital. But thanks to the collaboration of a lot of people, we’ve been able to transform the sadness into joy.” On Jan. 12, gangs from an hour east in the Port-au-Prince neighborhood of Martissant heisted the hospital’s delivery truck along with its two drivers and the new — and not yet paid for — generator, forcing the hospital leadership to close its doors. Nurses and doctors were forced to use the flashlights on their cellphones. The hospital can’t rely on the electrical grid because of Haiti’s continual blackouts. It was the latest crisis to hit the hospital, which over the past three years has been skating from one crisis to the next because of gangs that have cut off access to the capital. Comment to join the conversation Subscribers can now comment on a variety of articles.

The stolen generator meant the hospital had no electricity to run its equipment, and management on Jan. 13 stopped accepting new patients while discharging others. By Wednesday all of the beds were empty except for four in the neonatal ward. Too sick to go home, the babies were forced to remain after the hospital couldn’t find any other facility capable of taking them. Two small solar panels, not enough to power up the entire facility, kept the lights on in the room. After the Herald wrote about the latest tragedy to hit the 90-bed hospital, which receives patients from five regional departments in the country because of its specialized maternity and neonatal care, readers reached out to help. Some like Rachel Sawyer made a donation directly to the U.S.-based 501(c)(3) charity, Medical Benevolence Foundation, that supports the facility’s operations, while others contacted MBF directly. One donor, a husband and wife who wish to remain anonymous, reached out to the Port-au-Prince supplier through another Haiti charity and offered to pay off the stolen generator’s debt. “I gave birth to my son in 2020 and I was so incredibly grateful for the care I received. It really struck me that so many people don’t have access to quality healthcare, including even basic maternity care,” said Sawyer, 38, who lives in Chicago. “Every mom deserves that for her and her child.”

A new generator was delivered on Thursday, Jan. 20, 2022, to the Sainte Croix Hospital in Léogâne after Miami Herald readers responded to a story about the hospital having to close after gangs hijacked its new $38,000 generator. Sainte Croix Hospital E. Andrew Mayo, the head of MBF, said about 40 people responded “with gifts” and as of Thursday afternoon, they had $9,000 in hand to help Sainte Croix get the lights back on. There is also a promise, he said, of a $10,000 matching grant from a husband and wife who had also seen the story. Even though the total was still less than the $75,000 Sainte Croix calculated it needs to cover the cost of the new generator, transportation, installation and payroll for the week, Mayo said he took the decision to front the money for a replacement generator out of MBF’s funds. “This is what you don’t want to ever happen,” Mayo said about closing the hospital. “You don’t want to have to turn away mothers who are pregnant. They are the source of any emergency medical care in that town, anybody who is in an accident. When your hospital is closed, you are in big trouble, so we had to get it back open.”

While MBF has a budget of approximately $60,000 this year to help offset the cost of a neonatal intensive care unit and pediatric and C-section patients who can’t pay, Mayo said Sainte Croix gets no budget support from the government, which has no public hospital in the area. “It’s still a good story,” Mayo added, noting that the hospital did what it needed to and then Americans stepped in and said, “ ‘We’re going to help you regardless.’ ” To avoid another gang heist, Mayo and St. Louis had to get creative. They moved the new generator by boat rather than by road in order to avoid Martissant, where warring gangs continue to kidnap unsuspecting passersby and have forced the displacement of over 19,000 Haitians from their homes since June. “They loaded it onto a truck, drove the truck onto a boat; took the boat over from Port-au-Prince over to Carrefour,” said Mayo. “They finally got it off the boat this morning and got it over to Léogâne.” While MBF is continuing to raise funds for the hospital, there may be more good news.

Evens C. Lubin, a data analyst out of New York, said an American couple recently contacted him asking how his charity, Organization for the Recovery of Petite Riviere De l’Artibonite, or ORPRA INC., could help them get assistance to Sainte Croix. The couple, who wants to remain anonymous, was moved to help after reading the Herald article, Lubin said. “They asked me if they give us a gift how we can navigate the Haitian team to get the gift to the hospital so they can restart operations as soon as possible,” he said. Through Haitian contacts, Lubin said he managed to get in touch with St. Louis and Automeca, which sold the first generator on credit. After receiving a copy of the unpaid bill for $37, 950, Lubin said he reached out to the donors who agreed to transfer the amount to OPRA INC’s account. Once it arrives, the payment will then be sent to Automeca, Lubin said, to remove the burden of the unpaid debt for the hospital. “I feel very happy that my organization was able to help out,” he said. “And as a Haitian, it’s a big plus.” Mayo and Michelin said they are both grateful for the response and any additional money raised will go toward a solar project. “We already had two small solar panels and batteries installed, which is what was used to keep the NICU lights on for the babies that couldn’t be sent home,” Mayo said. “A few dedicated nurses have been there working while the rest of the hospital was dark and empty.”