Spirit Airlines has announced a new routing to Cap Haitien, Haiti's second largest city. Haiti was once, and could be yet again, a significant tourism destination - but this would be unlikely if tourists coudl only enter the country through a congested and unpedictable Port-au-Prince.  In Jamaica, most tourists fly into Montego Bay and bypass Kingston altogether.  Cap Haitien, with its history, beaches, and relative stability, may eventually become Haiti's Montego Bay.  Managed properly, increased tourism could be good for Cap Haitien and the north.  A full article on Spirit AIrline's recent announcement by Jacqueline Charles of the is linked and follows. 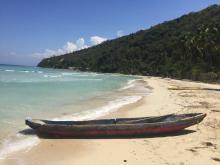 For many years, Haiti was a significant tourist destination.  However, the industry never recovered from the American embargo, erronous claims that the HIV/AIDS epidemic began in Haiti, political instability, and natural disasters made worse by deforestation and erosion.  Despite that, tourism has a great deal of untapped potential.  Sure the beaches and rum are great but other Caribbean countries have that as well.  It is Haiti's unique history and culture that could bring the right kind of visitors.  New York Daily News journalist Jesse Serwer writes below that Trump's "shithole" comment spurred interest in Haiti, including visits by celebrities such as Conan O'Brien who filmed a special there recently.  Read through his article and you just may find yourself planning your next vacation.

Below is a beautiful article (with similarly beautiful photos) taken by New York Times contributer Peter Kujawisnki.  The author, who previously lived in Haiti, visited as a tourist recently and reflects on what has and has not changed.  As with many of us who previously lived in Haiti, his memories are complicated and filters what he experiences now as a visitor.  He sees signs of progress and the potential renewal of long dormant tourism in a country that remains much in need of livelihood opportunities.  Visting Haiti, and experiecing what it has to offer, as he puts it is now neither brave nor unusual - just normal.

You don't have to go to Haiti to experience live Haitian music. There are venues in Boston, New York City, Montreal, and Miami that feature Haitian music a swell as annual festivals, the best of which is Miami's Compas Festivals.  It has always been outdoors, features many different musicians, and count on a large, enthusiastic audience.  An article by the Miami Herald's Jacqueline Charles about how the the Compas Festival has evolved over the years, and the challenges it still faces, follow.  More information and tickets are available here. 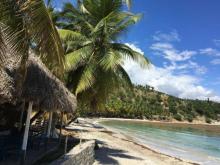 Below is an article by the Evening Standard's Claire Dodd about her experience visiting Haiti - not as an aid worker, missionary, or Haitian visiting family - but as a tourist.  Getting around Haiti may not be easy, but for those with a sense of adventure, it is well worth it.  Haiit's history of resistance, rich culture, and artistic traditions make it a unique and rewarding country to visit.  People often ask how to help Haiti - but as Jean Cyril Pressoir puts it, “...if you want to help...come as a tourist. Help us break from away from this pre-conceived idea, this prejudice that has us defined as a place where you come to help. Don’t come to help us. Come to enjoy yourself.”

Director and long-time Haiti enthusiast Jonathan Demme died on April 26th.  He lived a long life and, through his films, made people aware of Haiti - and more than that, its heroes.  Demme was reponsible for "The Agronomist", easily my favorite film about Haiti, concerning the life of Jean Dominique - a journalist and human rights activist who gave his life for what believed in.  Author and fellow Haiti enthusiast Amy Willentz writes below that best way to honor his memory is to learn about Haiti, engage, and to continue the struggle for human rights and democracy.  Organize, resist, and win - it's what Demme and Dominique would have wanted.

When I was living in Haiti many years ago, a friend's father passed away.  My friend was scraping by on odd jobs and needed to take out a large loan in order to finance the burial.  He felt that to do otherwise would be disrepecting his father's memory.  The poor, who can least afford it, are charged exorbitant rates for burial services in Haiti. What could change this?  Cultural change, such as accepting cremation or simplified burials, will take time. William Mellon (founder of Albert Schweitzer Hospital in Deschapelles) had himself buried in a cardboard box.  Government regulation and enforcement would help.  Below is an AP article on the hardships that burial costs place upon Haitian families.

Musicians from around the world performed at the eleventh annual International Jazz Festival in Port au Prince. This is a festival that has faced a great deal of adversity but gets better every year.  Art, music, and history are key to both increasing tourism and showcasing all that is good about Haitian culture.  Think about participating next year.  Mark Sullivan (All About Jazz) provides a read-out of the festival below.

Haiti can be a rewarding but challenging tourism destination.  Having an organization to help with logistics and orientation during the first visit can be helpful. The Kiskeya Guest House in Leogane, in addition to offering a nice place to stay outside of Port au Prince, now offers tours that celebrate Haiti's cultural traditions with an emphasis on Port au Prince, Jacmel and Cap Haitien.  Haitian anthropologist Jean-Yves Blot an Professor Erold Saint-Louis will lead the various trips and Haitian Creole immersion programs.  The agenda for their "Cultural and Mystical Haiti" tour follows.  Note:  The Kiskeya Guest House is associated with Kiskeya Aqua Ferme, a community initiative devoted to raising tilapia and growing cassava, hot peppers, and sweet potatos.

As the new year approaches, Haitians get ready to do two things – paint their houses and prepare a big batch of pumpkin soup (soup joumou).  Epicurious writer Sam Worley shares his experiences becoming familiar with soup joumou and what it represents to Haitians. This recipe is a good start but everyone makes theirs a little different.  Vegetarians can just leave out the meat. Interested in learning more about soup joumou and Haitian food more broadly? Check out the "Liberty in a Soup" documentary or one of the many websites featuring Haitian dishes such as Home is Home (Lakay se Lakay) or Haitian Cooking. Have a favorite website or cookbook? Please share in the comments section.