As the United States has stepped back from humanitarian leadership, Canada and Mexico have stepped up.  Rather than deporting Haitains who had become stranded in Mexico trying to reach the United States, the Mexican government has offered them one year renewable visas allowing them to work.  This has benefitted the Haitian migrants and it has also benefitted Mexico, which now has a new and manageable pool of very hard workers. It is a good example of solidartiy in a world that is sorely in need of more of it.  The full article by AP journalist Elliot Spagat follows. 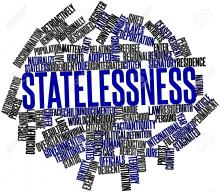 Stateless persons are not recognized as citizens of any country.  They are often vulnerable to exploitation due to a lack of access to health care, education, work, and justice.  It is a major problem in the Dominican Republic where the the government has long been reluctant to grant citizenship to Dominicans of Haitian descent.  Last week, the Haitian Parliament voted to accede to the 1961 Convention on the Reduction of Statelessness, making it the third member state of the Caribbean Community (CARICOM) and the 69th country in the world to do so.  The United Nations High Commissioner for Refugees (UNHCR) issued a statement praising Haiti for its committment. To become involved, consider joining UNHCR's "I Belong" Campaign to End Statelessness.

Anastasia Moloney (Reuters) reports that Haitian police have arrested nine people, Americans and Canadians, in connection with sex trafficking at the Kaliko Beach Club near Port au Prince.  In 2016, Haiti was downgraded to the lowest grade (level three) in the 2016 Trafficking in Persons (TIP) Report meaning that no progress had been made before and that foreign assistance from the United States could be reduced in certain areas. Haiti does have a national TIP action plan but it has yet to be resourced or implemented.  The arrests may be a welcome sign that the government is beginning to take TIP more seriously.