How Haiti Makes Some of the Best Rum on Earth 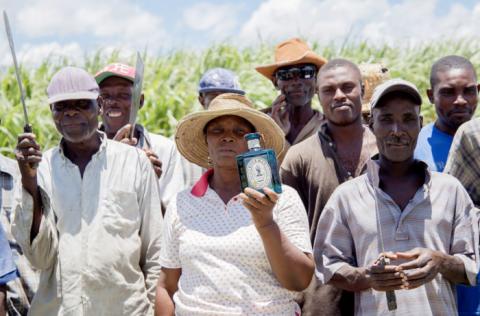 How Haiti is Making Some of the Best Rum on Earth

Rum culture may be a mainstay throughout the Caribbean, but one of the most overlooked countries in spirits, Haiti, is making a sugarcane spirit called clairin that's unlike any rum you’ve tasted.

Many people still view rum through the lens of the dark, rich and sweet offerings of decades past. But clairin, a traditional rum made in Haiti, showcases the spirit in its most essential, and some say, finest form. And it’s finally making the leap to the United States.  A regional spirit unregulated in its home country, clairin occupies a distinct, terroir-driven space in the rum spectrum. It even stands apart from better-known sugarcane distillates like rhum agricole or Brazilian cachaça.  Rum’s place in Caribbean culture is well known, but little is said about Haitian bottlings, despite the country housing more than 500 local distilleries—arguably more than any other country in the region. This booming DIY distilling scene makes Haiti home to some of the most diverse rum production in the world.  These hundreds of distilleries are called guildive in Haiti’s native Creole. It’s a French adaptation of “kill-devil,” an early colonial slang for rum. Guildives are small, rustic and run without electricity producing enough rum to serve their immediate village and not much more.  “The person with the most money in the neighborhood [often owns] the guildive, producing clairin with a donkey pressing the cane juice that goes into wild fermentation,” says Garcelle Menos, account manager for spiced-clairin brand Boukman. “Most of the time, they’re a combination of column and pot stills, very small columns and very small pots.”

To make clairin, sugarcane is hand-harvested and carted, often by animals, to the press. The resulting juice is moved to tanks where it ferments spontaneously, though some distillers are known to add baker’s yeast to help jump-start the process. While there is no certification, clairin is largely organic simply because there is no industrialized farming or pesticides used in these remote villages. Low-yield varieties of sugarcane like crystalline and Madame Meuze, long ignored by industrial producers, are still planted and favored by local distillers for their concentrated flavor.

“Most upper-class people don’t view it as something to cherish. [But] clairin is Haiti’s gold. Haiti is the lost world of rum.” —Garcelle Menos, Boukman Rhum

Natural inoculation of wild yeast from the plant requires longer fermentation than laboratory strains. This extra time allows the mash to develop complex flavors that guarantee no two batches of clairin taste the same, much like how wine differs from vintage to vintage.  Unlike many spirits, the fermented juice is distilled just once, retaining flavors that would be lost with further refinement. And in contrast to many others rums, finished clairin is not aged before being sold.  You might be familiar with Rhum Barbancourt, Haiti’s most famous liquor export. Also made from sugarcane, Barbancourt’s aged expressions fetch a premium in foreign markets, though even the distillery’s unaged rum remains unaffordable for most Haitians. Clairin is a significantly cheaper option and sold throughout the country, usually dispensed out of large plastic jugs at the market. According to Menos, “Most upper-class people don’t view it as something to cherish. [But] clairin is Haiti’s gold. Haiti is the lost world of rum.”  It’s worth noting that in the world of unlicensed distillers, the outlook isn’t all is rosy. Unlike commercial bottlings sold by regulated producers, raw material varies between clairin distillers, as does the quality of the spirit in kind. Bad clairin can simply lack character, though in extreme scenarios, if poorly made, could contain poisonous levels of methanol.

For prospective distributors looking to make the leap, this means they must evaluate both for taste, as well as analyzing the composition to make sure product is safe for consumption. Velier, in partnership with La Maison du Whisky, is the first company to make clairin available outside of Haiti and market it as a new spirits category. Helmed by Luca Gargano since the early 1980s, the Italian company is known to collectors for bottling and distributing some of the world’s rarest casks of aged spirits.  Gargano’s partner in the acquisition of sugarcane spirits is Dan Biondi. The two visited Haiti for several years, as they sampled clairin from villages throughout the country. Biondi says, as rum obsessives, they love the challenge of launching something new. “[It’s] an opportunity for all consumers to taste the heritage of the history of rum, completely natural and with new, unexpected flavors,” Biondi says.

Through their relationships with producers, the pair hope to bring clairin’s unique diversity to prominence, evidenced by packaging that lists each distiller’s name, village, sugarcane variety and vintage. It’s comparable how most high-quality mezcals are sold, which highlight a particular artisan from a specific place. It also requires extensive consumer education. “We traveled the world talking about clairin and we will continue to do it, because this spirit is too important in the heritage of rum and we will work hard to preserve it,” says Biondi.

The diversity of the spirit is astounding, given the relatively limited area in which it is produced…it says so much about the place where it is produced and the people behind it.” —Shannon Mustipher, Glady’s, Brooklyn, New York

The comparison to mezcal extends to tasting clairin. That’s one way that Shannon Mustipher, head bartender/beverage director at Glady’s in Brooklyn, New York, first related to it. “I drank some [clairin] off the still and became an instant fan,” says Mustipher. “I’d visited a palenque in Mexico a few years before that and had a similar experience drinking mezcal. The diversity of the spirit is astounding, given the relatively limited area in which it is produced. And like mezcal, it says so much about the place where it is produced and the people behind it.”

Sam Johnson, who mixes drinks at two of New York City’s most venerable cocktail bars, Death & Co and Clover Club, considers clairin to be the best sugarcane rum for cocktails. “A bartender will benefit from all of the green herb and mineral qualities that she or he has come to expect in an agricole, with more intense aromatics and a rounder, toasted sugar note on the palate,” says Johnson. “Clairin is an easy substitution for white rum and an interesting one for gin.”

Rum is defined as a distillate made from sugarcane. It can come from anywhere in the world, and there’s no limit to barrel treatments, age, flavoring or other enhancements. Clairin, by contrast, is rum in one of its purest expressions. It’s worth the effort to seek out.