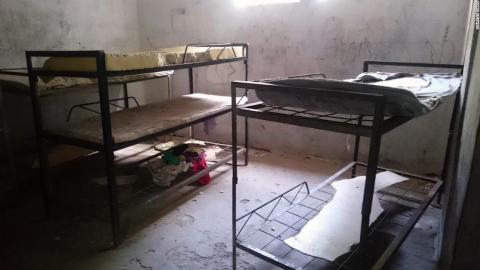 There are at least 30,000 children living in orphanages in Haiti.  It is a staggering number for a country of 10 million people, but perhaps even more shocking, most of them are not orphans.  The government estimates 80 percent of the children living in orphanages have at least one living parent. In many cases, parents themselves are placing their children in institutions because they cannot afford to care for them. It is a practice that has long been common in Haiti, exacerbated by the 2010 earthquake that left tens of thousands of people homeless. Parents believe their children will be better off in an orphanage where they will be fed, cared for, and sent to school. Unfortunately, that is not often the case.

The government's top anti-trafficking official says many orphanages are profiting off the backs of children. "They are forced into labor," says Fils-Lien Ely Thelot, president of the National Committee Against Human Trafficking. "And they're allowed to live in squalor so that foreigners will give money out of pity." Haiti is one of the poorest countries in the world. Pictured, crumbling infrastructure is widepsread. According to a report released in June 2017 at Haiti's first national conference on child trafficking, an estimated $100-million a year is being donated to orphanages in Haiti by church groups and non-profits, mostly in the United States. The non-profit that authored the report, Lumos, which was started by Harry Potter author JK Rowling, says most of that money never reaches the children who lack basics, like food, water, medical care, and education. In the worst cases, Lumos has witnessed and reported on cases of child sexual exploitation and human trafficking inside Haiti's orphanages. "We have to educate the donors and the volunteers," says Georgette Mulheir, executive director of Lumos. "For all of your best intentions, if you are giving money to orphanages, if you are volunteering in orphanages, you are helping to drive trafficking in Haiti.

Mulheir says Haiti doesn't have an orphan crisis; it has an orphanage crisis. She says unscrupulous people have seen that orphanages are a way to make money, and they prey on the most vulnerable people in their communities. "They pay people called 'child finders' who go out into the community and essentially put pressure on parents to give them their children," Mulheir says. "They will tell parents, 'you are poor, you can't afford your child's education. Give them to the orphanage. We'll make sure they have an education, have healthcare, have opportunities that you could never give them.'" 42-year-old Mireille says that's what happened to her. Her nightmare began on January 12, 2010, when a 7.0 magnitude earthquake struck near her family home. She was still living in a temporary shelter four years later near Port-au-Prince, when her husband died. Mireille was left struggling to provide for her three young boys, when she was approached by a man who offered to help.

That man, she says, was Jonathas Vernet, a self-proclaimed community leader and owner of Four Winds Spirit orphanage. Mireille says Vernet promised he would take good care of her children. "I didn't have anything to take care of them," Mireille says. "He told me that he would put them in school." Mireille says she was assured her children were thriving in their new home, so she never went to visit them. She was shocked two years later, when she was contacted by Lumos and informed that her children were suffering. "When I showed up I saw the beds weren't covered, they weren't drinking clean water, the kids were sick," she says of her visit in May 2016. "I thought the orphanage was a good orphanage, but the condition I found them in when I finally went to see them... they were dirty, all their clothes were dirty."

In a joint investigation by Lumos and the Haitian government, Four Winds Spirit was cited as one of the worst orphanages in the country in June 2016, and shut down by the government agency that oversees Haiti's orphanages. Mulheir remembers her first visit to the orphanage. It was Mireille's oldest son, Sondy, who opened the door and let her in. He was just 11 years old at the time. "He was about the size of an 8-year-old, so I would not have said he was 11," she says. He was emaciated. He was so skinny and he was wearing very dirty, ragged clothes. He was very, very distressed, very stressed. He struggled to make eye contact and he was just clearly a traumatized child, as were the other 40 who we saw that day."

Sondy says Vernet forced all of the children to work. The children did all the cooking and cleaning. They collected firewood and washed clothes. They never went to school. And Sondy says they all suffered neglect and physical abuse. "When I was in the orphanage, (Vernet) beat us," Sondy says. "I didn't like it there at all." Vernet admits he hit the children with a whip, but he calls it discipline, not abuse. He also acknowledges the conditions in his orphanage were bad, but he blames American donors who came to visit the children and brought small amounts of food and water, but didn't offer sustained financial support.

Vernet even acknowledged lying to parents to convince them to give up their children, but he says they deceive him, too, by denying the children belong to them. "They lie to me too," he explains. "I have to lie too, they lie to me. 'No father?' 'No, I'm not the mother, they not my kids.' They lie to me, I take them," he says. Vernet says he doesn't understand what he did wrong. Thelot, Haiti's top anti-trafficking official, says that attitude is very common. "You can find people that practice human trafficking, and they are not conscious that what they are doing is human trafficking," Thelot says.

Mulheir says education is crucial. "People need to understand that if you set up an orphanage in order to make money out of children as a business, that is a form of trafficking, and it's not going to stop until someone is prosecuted for doing this," she says. Although Lumos has worked with the government to close five orphanages that trafficked children, none of the orphanage owners have been arrested. Thelot says the issue is not a priority for police. The Haitian government created a national committee on human trafficking in 2015, but has not committed any resources to allow the committee to function. "We don't have an office, we don't have employees, we don't have the means to go out in the field and push investigations, we don't have any direct contact with any of the official authorities that are supposed to accompany us when we go out in the field," Thelot says." "So it is extremely hard and frustrating to get the results people are expecting from us."

Thelot says fighting human trafficking is not a priority for a government that is dealing with so many other issues, like widespread dire poverty. According to the World Bank, one quarter of all Haitians live on less than $1.23 a day. "This is a problem of urgency," Thelot says. "This is a country where every day we have a lot of urgencies to address, so other things can wait and wait, and sometimes, wait, wait for a long time."

In many countries, like the United States, orphanages don't exist anymore, replaced by a system of foster care and small group homes. This is what Lumos wants for Haiti, but changing long-held traditions and cultural practices isn't easy. There are, of course, children who truly are orphans. Mulheir concedes there are certain circumstances when you can't reunite a child with their family. "Either the family is completely absent, the child was abandoned at birth or you've got a very abusive family or you've got parents who simply don't want their child back and nothing you can do will persuade them," she says.

Even for these children, Lumos does not support placing them in orphanages. In those circumstances, Lumos advocates for foster care and local adoption. Mulheir says there are some foster families in Haiti already, but the system only exists on a small scale. "A big part of the solution for Haiti that we're helping the government with, is to develop foster families across the entire country," she says. Sondy is now back at home, and back in school.Lumos remains in close contact with reunited families to make sure parents don't send their children back to an orphanage. The practice is so much a part of the culture in Haiti, that it is difficult to change hearts and minds. "We're doing a lot of work with churches, with communities ... to change people's minds about orphanages," Mulheir says. "We have to get social workers and teachers and people who are respected in the communities to spread the message."

Mireille has received that message loud and clear. Today, she makes a modest living selling small items on the street, and she receives support from Lumos to send her children to school. She says life isn't easy, but she will never put her children in an orphanage again. "I'm making it work," she says. "I'm living with my children." For that, her eldest son is grateful. He's back in school, and dreams of a future as a school teacher. He's growing, he's thriving, he's happy. "When I live with my mom, my mom shows me a lot of love, a lot of affection," Sondy says. "When I'm with my mom, I have everything. When I was in the orphanage I didn't have anything."