Haitians Will Lose Deportation Protection in 2019 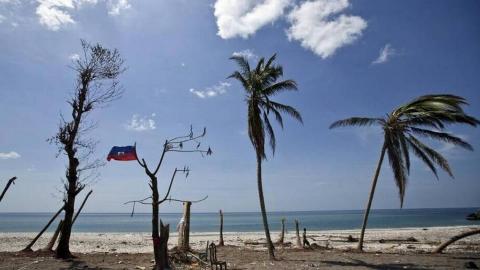 After years of being shielded from deportation from the United States while their disaster-prone country continues to recover from its devastating 2010 earthquake, tens of thousands of Haitians will now lose that safeguard. The special deportation protection known as Temporary Protected Status, or TPS, will be revoked for as many as 59,000 Haitians living and working in Miami and across the U.S., Department of Homeland Security Acting Secretary Elaine Duke announced Monday. The protection will permanently terminate July 22, 2019, allowing Haitians living in the U.S. under TPS an 18-month window to return to their struggling homeland. At the end of the 18 months, Haitians who had TPS but remain in the U.S. will return to whatever immigration status they previously held, leaving them facing possible detention and deportation if they stay in the country illegally.

“With this decision, the law is relatively explicit that if the conditions on the ground do not support a TPS designation, then the secretary must terminate the TPS designation,” a senior administration official said on a call with reporters Monday night to announce the decision. “The conversations she had were constructive. They were informative. They were helpful. And we fully expect that in the 18 months coming up, the acting secretary will continue those conversations with the members on the Hill and the Haitian government to prepare for the return of Haitian [TPS] recipients.”  The decision comes 14 days after DHS announced it was terminating TPS for 2,500 Nicaraguans and delaying a decision for 57,000 Hondurans, which automatically gave them a six-month extension after their current status expires in January.

The announcement, while pleasing to immigration hardliners who argue that the provision was never meant to be permanent, deals a hard blow to longtime Haitian and immigration advocates. For months they have lobbied the Trump administration to extend the status for at least 18 months. It had been set to expire Jan. 22. “Haiti is not ready to absorb 58,000,” said Marleine Bastien, a South Florida Haitian activist who has pushed for at least an 18-month extension of TPS. “It’s going to be a disaster for the 58,000 families in the U.S. and a disaster for Haiti. Clearly they are not making decisions based on facts on the ground, but rather politics. This is purely unacceptable.”

Members of Congress from South Florida reacted with dismay. Florida Sen. Bill Nelson, a Democrat, called the decision “unconscionable,” urging the administration to reconsider. U.S. Rep. Ileana Ros-Lehtinen, a Republican, and U.S. Rep. Frederica Wilson, a Democrat, both vowed to look for legislative solutions. TPS holders were shocked by the news. While they had hoped for 18 months more in the country, they didn’t expect that window to end in termination of the protection. “I do not believe I will survive one month in Haiti,” said Paula Vilme, 31, a single mother of three young children who came to the U.S. when she was 9 years-old. “I’ve been here for so long. My whole life is here...This is home, so when they tell you to go back, where am I going to?”

In May, Duke’s predecessor, John Kelly — now Trump’s chief of staff — announced a limited extension of six months for Haitians. It took effect July 22. But that decision came with a strong signal from Kelly that it would likely be Haiti’s last reprieve. In response, an unprecedented wave of Haitian TPS-holders illegally crossed into French-speaking Quebec out of fear that they would be detained in the U.S. and deported to Haiti. Quebec has a large community of Haitians. Haiti’s Foreign Minister Antonio Rodrigue, who personally lobbied Duke for an 18-month extension, called the decision disappointing. But he said 18 months gives Haitians time to get their affairs in order, “and the government time to prepare for their return.”

Enacted in 1990, TPS allows nationals from countries facing civil strife or major natural disasters who are already in the United States to temporarily remain and work here. But President Donald Trump has repeatedly pledged to impose tighter immigration controls, with many of his supporters saying the program has been abused. Congress, critics of the program say, needs to provide a permanent fix for the more than 300,000 Haitians and Central Americans who currently are protected from deportation under TPS.

According to a recent study by the Center for Migration Studies, Haitians on TPS have been living in the United States on average for 13 years, and have 27,000 U.S.-citizen children among them. More than 80 percent are employed, while 6,200 have mortgages. TPS advocates have maintained that terminating the program would be cruel and families would be torn apart. And Haiti, they say, still hasn’t been sufficiently rebuilt after the earthquake to accept the influx. “Some disasters take a long time to recover from,” said Randolph McGrorty, an attorney and director of Catholic Legal Services in Miami, which provides legal advice to the Haitian community. “What happened in Haiti is a good example ... It takes time.”

But DHS has slowly been narrowing the number of TPS holders. In September, it announced that it was canceling the protection for Sudan nationals as of 2018 but would allow those from South Sudan, a country in the throes of an armed conflict, to remain until mid-2019. The lack of a decision on Honduran TPS holders had some advocates hoping that nearly 200,000 Salvadorans may also be spared. Their status expires in March 2018.

Royce Murray, policy director of the American Immigration Council, said Duke has broad discretion under the statute to consider not just the earthquake but the “totality of country conditions that have complicated their ability to recover from that disaster,” including new variables that make it difficult for their nationals to go home.

Murray and others said the non-decision on Honduras underscored tensions in the Trump administration over TPS, which a source familiar with the proceedings noted were centered on a recent State Department report on country conditions. The source, who was not authorized to speak to the press, said U.S. foreign service officers were put under considerable pressure by DHS, with policy hawks and politicians at State disagreeing over whether conditions had improved. “It seems to us as outsiders, the folks who are most familiar with country conditions in these foreign countries are most inclined toward an extension. Those who are removed from country conditions and focused more on the politics of it have leaned the other way,” Murray said after the Nicaragua and Honduras announcements were made. “I think the tensions have been very real.”

In Haiti’s case, advocates say the country is in no condition to handle the influx, seven years after the 7.0-magnitude quake created billions of dollars in damages, left 300,000 dead, 1.5 million injured and an equal number internally displaced.And the country remains vulnerable. Hurricane Matthew hit the southern region and created $2.8 billion in damages last year, followed by brushes from hurricanes Irma and Maria, and the country continues to suffer from a deadly cholera epidemic, a disease introduced by U.N. peacekeepers. Last week, the Office of Civil Protection confirmed that at least five people had died and 10,000 homes were flooded after days of rain.

Haiti advocates spent months lobbying for support to continue TPS, including a campaign of newspaper editorials and letters of support from faith leaders, governors, city councils and congressional lawmakers on both sides of the aisles. “Haiti is a textbook case for an 18-month extension due to Hurricane Matthew, the cholera epidemic and incomplete earthquake recovery,” Steven Forester, immigration policy coordinator for the Boston-based Institute for Justice & Democracy in Haiti, argued. Haiti’s U.S. Ambassador Paul Altidor, who requested an 18-month extension in an October letter to Duke, noted that the country’s crippling economy relies heavily on the diaspora working in the U.S. and islands near Haiti that were also hit by hurricanes in 2017. They contribute more than $2.4 billion annually in remittances to the Haitian economy “As many of these countries struggle to rebound from these hurricanes, Haitian expatriates working there have found themselves unable to support their families back home, further complicating Haiti’s recovery process and delaying the ability of the country to place itself back in the position that it was in prior to the 2010 earthquake,” Altidor wrote.

Despite Altidor’s forceful advocacy, and that of Rodrigue, the White House hadn’t seemed inclined to extend the protection for Haitians’ — despite Trump’s promise during his presidential bid to be Haiti’s biggest “champion.” Relations between the two nations have been at best tense, with Haiti’s ambassador to the Organization of American States in April publicly snubbing the U.S. over Venezuela as he accused diplomats of meddling in the South American nation’s internal affairs. Duke’s decision to allow an 18-month delay was informed by lobbying from Altidor and Rodrigue, a senior administration official said. Duke met with members of the Florida congressional delegation, including Nelson and also contacted Gov. Rick Scott, who is among several governors who supported an 18-month extension on behalf of Haitians — 32,500 of whom, according to the Center for Migration Studies’ analysis, call Florida home.

She worked to understand conditions on the ground in Haiti. U.S. Citizenship and Immigration Services, the DHS department responsible for administering the TPS program, determined that “Haiti has made significant progress since 2010,” the official said. “Only Congress can take action to reform the TPS program or address the concerns voiced by many that these individuals should have a future in the United States,” the senior administration official said. “The secretary has repeatedly said no one should live their life 18 months at a time, and that a permanent solution should be found.”

DHS noted that the number of people displaced by the quake had decreased by 97 percent and a legitimate government is now in place. Haiti had received four 18-month extensions on TPS after its initial 2010 designation. But Kelly, who repeatedly emphasized the “temporary” in TPS, was not keen on granting another renewal or re-designation. After traveling to Haiti in late May to meet with Haitian President Jovenel Moïse, Kelly told the Miami Herald that he believed that conditions in Haiti had improved. He cited as proof Moïse’s plans to rebuild the country’s quake-damaged presidential palace, and that the United Nations was pulling out its peacekeeping mission.

While the U.N. did withdraw its blue-helmeted soldiers from Haiti under pressure from Washington to reduce its peacekeeping missions around the globe, it still considers an impoverished Haiti a threat to regional security. It replaced the $346-million-a-year peacekeeping mission with a smaller, less costly one focused on justice, human rights and police reform. Meanwhile, the budget recently passed by Haiti’s parliament doesn’t have any money allocated for the palace’s reconstruction. Tom Jawetz, vice president for immigration policy at the Center for American Progress in Washington, D.C., disagrees with DHS’ assessment on Haiti’s progress since 2010, or in the last six months since the last extension was given by Kelly. “This administration has already spoken as to conditions on the ground,” Jawetz said referring to the May decision that said “Although Haiti has made significant progress in recovering from the January 2010 earthquake that prompted its initial designation, conditions in Haiti supporting its designation for TPS continue to be met at this time.”

“In the intervening months, we had hurricanes Irma and Maria and a worsening food insecurity crisis,” Jawetz said. “The collection of factors on the ground between May 2017 and Nov. 2017 can’t possibly be cited as justification for coming to a different decision than what they made six months ago.” Herald staff writers Patricia Mazzei and Mary Ellen Klas and McClatchy Correspondent Franco Ordoñez contributed to this story.

If you have Temporary Protected Status, or TPS, lawyers say you should consider:

▪ A one-on-one meeting with an immigration lawyer to review immigration history and options.

▪ Honest conversations with neighbors and relatives about custody arrangements.

▪ Getting a “power of attorney” document.

▪ Come up with a contingency plan regardless of whether the status is extended for six months, or 18 months, as advocates have requested.

Kids of TPS parents gathered while speakers addressed the media at the FANM office in Little Haiti, Nov. 6, 2017, in reaction to Temporary Protected Status possibly being terminated.