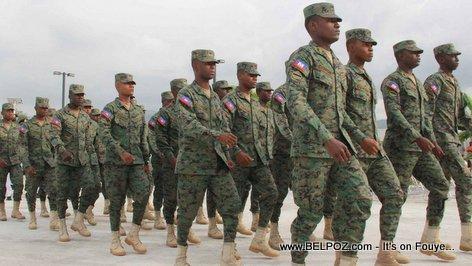 Haiti's government has launched a campaign to re-establish its army, dissolved more than 20 years ago.  It wants to recruit about 500 men and women to help deal with natural disasters and to patrol borders.  The recruitment drive follows the announcement by the United Nations mission that it would be leaving Haiti in October.  But critics say the island's small budget should be spent on the national police force of about 15,000 officers.

A Ministry of Defence statement said the recruitment drive is open to both men and women between the ages of 18 and 25, who have passed their secondary education exams. The UN Security Council agreed in April to withdraw their security forces, the blue helmets, and leave only a small police presence to support the Haitian police.  The UN departure has sparked a debate over whether Haiti should or should not form a new army.

Many politicians support the idea arguing it would provide jobs for young people.  But the government's critics say a military force could quickly become politicised, becoming a weapon in the hands of whoever is the president or prime minister. For much of Haiti's history, the army has been used to crack down on political dissent by a series of authoritarian presidents.

During the 29-year family dynasty founded by Francois "Papa Doc" Duvalier in the 1950s, the army was pushed aside and replaced by the Tonton Macoutes, a feared private militia famed for its savagery. But when Duvalier's son, Jean Claude, was ousted and fled to France in 1986, the army high command - notorious for its repressive tactics and packed with Duvalier appointees - remained in place. After Haiti's first democratically-elected president, Jean-Bertrand Aristide, was ousted in a 1991 military coup, soldiers and paramilitary forces committed countless atrocities and are estimated to have killed about 4,000 people over the next three years. Haiti's leaders argue the new army would have different kinds of military duties, providing help after natural disasters and fighting smuggling. Many international donors have been unenthusiastic, after having poured billions of dollars into developing the Haitian National Police which now has about 15,000 trained members.