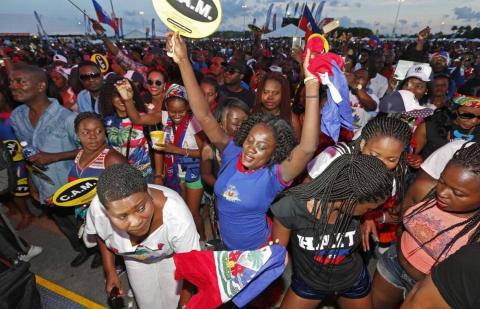 Music producer Rodney Noel was on his way back from Haiti when he began musing about a sold-out dance party he promoted weeks earlier at a Hallandale Beach nightclub. Featuring two of the most popular bands on the scene, the father-son Haitian music pioneers Top Vice and T-Vice, the booming party inside the gritty nightclub attracted 2,000 konpa, also spelled compas, fans. Noel, always trying to stay one step ahead of Miami’s competitive Haitian music industry scene, began crunching numbers. “If we did two bands and it drew 2,000 people, then how about four bands?” he said, recalling the moment when he decided to take konpa out of the nightclub darkness and onto a big, outdoor stage under glowing lights.

Nineteen years after its birth on a rocky Virginia Key Beach, Miami’s Haitian Compas Festival is still going strong, expanding this year from a one-day event to Saturday and Sunday at Miami’s Bayfront Park. One of the largest Caribbean festivals in the United States, it has become a place to see and be seen, where veterans like T-Vice play their hits; where an up-and-coming Haitian-American singer like Steph Lecor tries to win over konpa fans, and where Haiti-based rapper Marinad 007 will make his international debut months after his catchy, socially conscious “Madan Papa” hit exploded onto the country’s airwaves. “It means a lot to be able to showcase the positive side of our country, our culture,” said Roberto Martino, lead singer of T-Vice, which headlined the first festival with its hit “Bidi Bidi Bam Bam.”

But putting on such a festival isn’t easy — or cheap. While Haiti’s infectious and at times unruly beats continue to feed a growing fan base, the number of companies willing to act as sponsors has waned over the years. Just three years ago, for example, American Airlines provided first-class tickets for members of the French Antilles band Kassav to make a rare appearance at the festival. This year, Noel and partner Jean-Michel Cerenord are paying for dozens of musicians to fly in from Haiti and elsewhere to perform. “When you have a budget of between $800,000 and $1 million and you can barely raise 10 percent from sponsorship and everything has to come out of pocket, you have to be a strong promoter or strong community leader to keep a show like this going,” Noel said. And the challenges aren’t just exclusive to Compas Fest, or Haitian music. The organizers of Memorial Day weekend’s Best of the Best Concert, also at Bayfront Park, say that after 11 years of bringing top reggae and dancehall acts to Miami, they are still having to prove themselves to potential sponsors.

Local radio personality Papa Keith of 103.5 The Beat, who is organizing a June 17 festival at Charles Hadley Park in Liberty City, said he has run into the sponsorship wall while reaching out to firms. In announcing the festival on his Instagram account, he wrote: “At this very moment, I have no guarantees on how I’m going to even pay for this event.” “I can’t tell people how they should spend their sponsorship dollars, but I will inform my audience about who’s taking interest in them and who’s not,” said the DJ, who produced Compas Fest commercials for his station. Sandy Dorsainvil, who is trying to bring free Haitian music concerts to cities around South Florida, said that many companies don’t realize the spending power of ethnic communities. “Even though the Haitian-American community makes up a large portion of the spending power of the black community in South Florida, it is hard to get companies to invest in advertising dollars,” said Dorsainvil, who is producing Friday’s Sounds of Little Haiti concert, headlining Haiti-born hip-hop artist Wyclef Jean at the Little Haiti Cultural Complex.

RAlthough Sounds of Little Haiti is usually free, Dorsainvil said that a lack of sponsors for the showcase has meant asking attendees to pay a $15 donation. Companies, she said, “feel that they’ve reached us when they attempt to reach the African-American community, not realizing that the Caribbean community has an aesthetic all of its own.” The U.S. Census estimates that a rising share of the U.S. black population is foreign-born, and of that, an estimated 1,062,550 is of Haitian ancestry, according to the 2015 American Community Survey. While the number, which some argue is under-reported, may be small, it represents a growing group, according to the Census. “They buy Toyotas and shop at Home Depot,” said Noel, who has had to cull together local sponsors like former North Miami Mayor Andre Pierre’s law firm, Miami-Dade County Commissioner Jean Monestime, the C.A.M. money transfer companies and other small businesses to pull off the event.

American Airlines spokeswoman Alexis Aran Coello says that the carrier, which operates daily flights to Port-au-Prince and Cap-Haitien, has seen a “big shift in corporate sponsoprships” since its 2013 merger with USAIR. The company now focuses on kids, human services, the military and veterans. “Our corporate sponsorship is with organizations that cater to these three areas,” Coello said. “We’re still supporting [Haitian causes]; it’s just different.” Sponsors or not, the show still has to go on, said Noel, who counts among his proudest moments a 2002 phone call from Wyclef Jean congratulating him on his festival being named No. 8 in the United States. Another proud moment, he said, came with the decision to finally turn the event into a two-day festival after years of debating. “Compas Fest is one of the oldest festivals in South Florida. We started before Ultra, before Jazz in the Gardens and all of those other festivals that are three days and two days,” Noel said. “The thing is when you have people coming from out of town, they come for a week of activities. I don’t think one day of fun is enough for them.”

Another reason for the move is the demand from bands to participate, and criticism from festival-goers over the years about bands being forced to rush through their sets or getting squeezed out entirely. But with the decision to also feature bands such as former Haitian President Michel “Sweet Micky” Martelly, RAM and Harmonik, on Sunday comes some competition. Several miles north at Florida International University’s North Miami campus, the organizer of the Madame Gougousse Haiti Cup is promoting a concert at the soccer tournament finale featuring T-Vice, dISIP, Gabel and Djkaout #1, all of whom would have performed Saturday at Compas Fest, at his soccer tournament finale. Noel isn’t phased by the competition. “Compas used to be in the dark in the nightclub,” he said. “I took it not only outdoors, but to a big stage full of lighting, and we did it downtown. It was a big plus for Haitian music to make that transition. A lot of people don’t go to nightclubs, but they go to Compas Fest.”

When: 3 p.m.-midnight Saturday and Sunday

Tickets: Tickets can be purchased at compasfest.eventbrite.com or local ticket outlets in the Haitian community or call 305-945-8814.