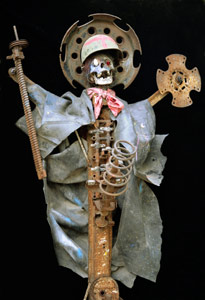 The Grand Rue Sculptors will hold the second Ghetto Biennale Art Festival from the end of November through early December.  Film-makers, academics, photographers, musicians, architects, and writers will converge on Grand Rue to make and display Vodoun infused art with themes of survival, resistance, and redemption.  If you cannot attend, check out the individual artists and their work online.  Details and a draft schedule below.

"The Grand Rue Sculptors are a community of artists living in a popular down town neighbourhood of Port-au-Prince, Haiti.  In December 2009 the 'Sculptors of Grand Rue' hosted the 1st Ghetto Biennale 2009.  Over forty artists, film-makers, academics, photographers, musicians, architects and writers came to the Grand Rue area of Port-Au-Prince to make or witness work, that was shown or happened in the neighborhood.  The 2nd Ghetto Biennale 2011 will take place from the end of November until the middle of December 2011. All works must be made and exhibited in Haiti.  Artists will be invited to pass one to three weeks in Haiti before presenting their work in the neighborhood to an audience of local people, Port au Prince neighborhood communities, arts collectives and arts organizations.  The 2nd Ghetto Biennale will be co-curated by Andre Eugene, Celeur Jean Herard and Leah Gordon.  We will be privileging applications from artists that attended the inaugural event as we wish to encourage and strengthen the connections, collaborations and relationships that were established during the 1st Ghetto Biennale 2009.  There will be also be at least twenty new artists accepted too.  Please check the archive section for the 1st Ghetto Biennale to get a feel for the previous projects." (Ghetto Biennale Website)

If you are interested in learning more about the Grande Rue Sculptors, a good place to start is this video entitled “Atis-Rezistans” (Artist Resistance).  According to the description, “Grand Rue is the main avenue that runs through downtown Port au Prince, Haiti. At its southern end is a community that has a historical tradition of arts, crafts and religious practice.  Contemporary Haitian artists Celeur, Eugène, Claude and Guyodo all grew up in this ghetto atmosphere of junkyard make-do and artistic endeavour. Their powerful sculptural collages of have transformed the detritus of a failing economy into bold, radical and warped sculptures.  Their work references their shared African & Haitian cultural heritage, a dystopian sci-fi view of the future and the transformative act of assemblage.  The monumental works they have created are liberally scattered around this slum area, transforming the clamorous area into an organic art installation. This multi-layered film is a portrait of a neighbourhood both materially poor but culturally rich, and a meditation of the links between sex, death and creativity as expressed through the Vodou spirit Gede, that influences all their work.  Information about the artists also available at the Atis-Rezistan website.

December 6th: Inivisite Popile starts (a series of talks, one each afternoon, by academics and Haitian art experts, that will discuss many different aspects of both contemporary and historical art practice in Haiti.)

December 14th (TBC): TBC Solemn Procession from Grand Rue site to the Cemetery with local funeral band in memory of the three former Ghetto Biennale participants that lost their lives in the earthquake: Louko, Flo and Laurens.