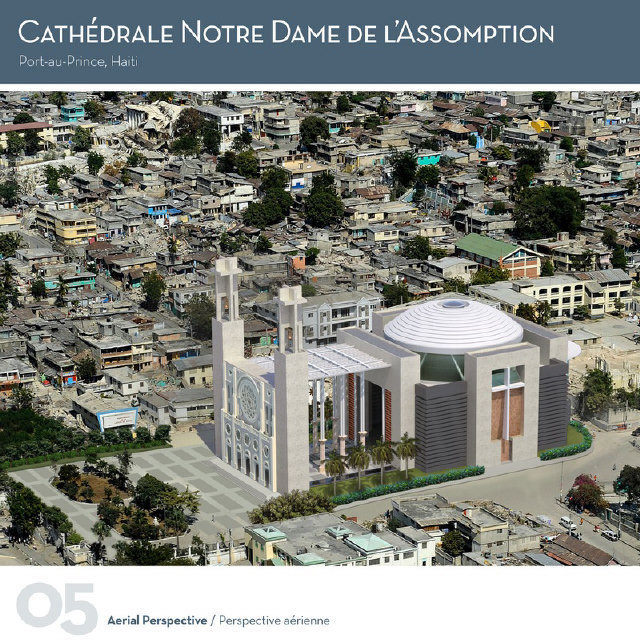 The Catholic and Episcopalian cathedrals were two prominent landmarks in Port-au-Prince prior to their destruction in the earthquake.  Plans are now underway for the reconstruction of each.  A Puerto Rican team has won an international design competition to rebuild the Catholic Cathedral.  The Episcopalian cathedral will be rebuilt by a Virginia-based firm. Each will be built back better, able to withstand hurricanes and earthquakes.  Learn more at the websites of the Catholic and Episcopalian Cathedrals.  Full Miami Herald article below.

CORAL GABLES, Fla. -- Almost three years after an earthquake toppled the Roman Catholic and Episcopal cathedrals in Haiti's capital, visions for their resurrection have started to take shape as officials from both churches begin considering proposals to rebuild them. A six-member panel led by the dean of the University of Miami's School of Architecture met this week in South Florida to choose the winner of a design competition that sought ideas for rebuilding the Notre Dame de l'Assomption Cathedral. Meanwhile, Episcopal Church officials have selected a Virginia-based architectural firm to design a new Holy Trinity Cathedral. Both cathedrals collapsed in the Jan. 12, 2010, earthquake that leveled much of Port-au-Prince. Their destruction left people yearning for the comfort of public monuments, said Haitian-American writer Edwidge Danticat, one member of the jury that met in Coral Gables to select the winner from 134 designs submitted as part of the Notre Dame competition.  "When so much is chaotic and so much is not in an ideal state, it's wonderful to have beautiful things around us, spiritual things that connect our humanity. I think a cathedral is one of those things," said Danticat. "Kings, presidents have walked in it, but so have the poorest people in the neighborhood." The jury's other members are Haitian architect and former government minister Patrick Delatour, the editor-in-chief of Faith & Form magazine, a liturgical consultant and a structural engineer specializing in disaster reconstruction. Haiti's recovery from the quake has been slow, and Catholic Church officials hope their project will encourage more reconstruction. "We really feel the cathedral had to be a flagship for this effort, not only for the church but also for the entire capital," said Yves Savain, a consultant to the Archdiocese of Port-au-Prince and the competition's coordinator.

All four of the competition's finalists incorporate the ruins of the original cathedral completed in 1914, though that wasn't required. In one design, a wall slides open, exposing the interior of a new rotunda to an outdoor square lined by columns that were inside the old cathedral. Another design features a marketplace leading up to an octagon-shaped cathedral with a palm tree design inside its dome. One finalist would rebuild the cathedral almost exactly as it once was. Another would build a new cathedral in curved shape that Danticat described as "an angel's wing."  The archbishop of Port-au-Prince will announce the winner Thursday. Church officials will decide later whether the winning design will be built eventually or altered. The Episcopal Church selected Arlington, Va.-based Kern Group Architects for the Holy Trinity project. Its design will incorporate three murals painted by Haitian artists to include Haitian people in biblical stories. Holy Trinity was renowned for its 14 murals, but eleven were lost in the quake. "I've been studying their art, their primary use of color and graphics, the indigenous plants, the need for shade - all that needs to be balanced with the site and the cathedral," said Tom Kerns of Kerns Group Architects. "We really want to spend time understanding the culture of the Haitian people so that this project really does reflect them." It could be years before the new cathedrals, designed to withstand earthquakes and hurricanes, are completed.