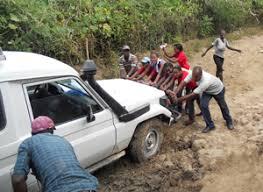 Watching the documentary made me think of all the trips I had taken throughout the country - in the back of colorful tap taps, in or sometimes on busses, in the back of trucks filled with fruit or charcoal, or when lucky, being able to get a free ride (woulib) from someone driving by with an empty seat.  The tap tap is a metaphor for Haiti - it's hot, crowded, and often uncomfortable, but with some resilience and a sense of humor, everyone gets by together.  In the back of the tap tap, people can talk to anyone about anything - religion, politics, sex, it doesn't matter.  People trade jokes, insults, and make the time go by.  When everyone is wedged in shoulder to shoulder, it may be less comfortable but it is safer.  I was once coming down the awful Route National Three in a tap-tap when we hit a speed bump that a community built over night to try to slow down vehicles passing through their town. If there had been just a few of us, we would have flown out and most likely gotten hurt.  Sticking together kept us safe.  Life is like that in Haiti.

My most memorable trip was from Port au Prince to Hinche.  I was picking up friends visiting from the United States and their plane was late. While the road to Mirebalais was very bad, we could still make it by nightfall.  By the time we got to the station where the tap taps gather to make that trip, they had all left.  There was however a cargo truck "getting ready" to go.  OK, it will be slower but it's the ony game in town so let's try it.  The truck left late, it was extra slow, it got dark, and in the middle of the moonless trip, the headlights stopped working.   The driver said "it's ok - I think I can do it without lights".   Neither being able to see the road nor wanting to tumble into a ravine, we went into problem solving mode.  I had a flashlight and offered to sit on the hood of the cargo truck and shine the light on the road but was too heavy for the job.  So we asked for a volunteer and a kid was more than happy to do it.  He was our human headlight for several hours.  Rolling into town, tired and hungry, we decided morning travel was the way to go - and not on cargo trucks when possible.

On another trip from Hinche to Pignon, for which the road which exceptionally bad, the tap tap tipped over on its side and everyone fell out of it.  The passengers proceeded to spend about ten minutes throwing every insult imaginable at the driver and threatening to walk the rest of the way.  Once they had calmed down, looked around, and realised how long that walk would be, people sighed, righted the tap tap and everyone got back in.

Going up Mont Kabrit in a tap tap, the brakes gave out.  Most of us were preparded to jump rather than tumble into the ravine.  The tap tap was stopped by a tap tap behind us but an older man had crushed his hand between the two trucks.  The rest of the passengers took care of him as best as possible and the driver took him to a hospital.  The issue was deciding whether to take him to a government hospital which was close or a charity hospital which was further but would provide him a better quality of care at no price.  The passengers debated and decided on the former.

Everyone who has travelled around Haiti has stories like these.  Trips would be made less dangerous by the development of a proper road network.  It would also improve the economy, public health, disaster response, and just make life easier and less expensive for people visiting friends, family, or seeking professional and educational opportunities elsewhere.  The documentary does a great job of showing the challenges - but there is also that As the silver lining though of solidarity and camraderie - it's unpleasant but it's unpleasant for everyone, so make the best of it together.