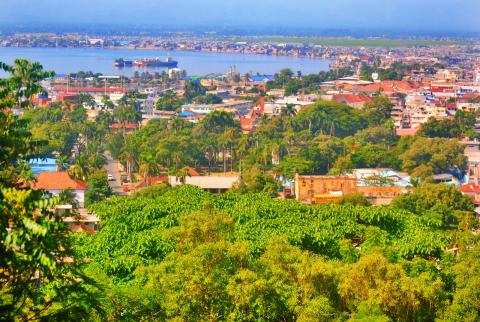 Northern Haiti’s travel market just got some competition. Spirit Airlines is bringing its stripped-down “bare fare” to Cap-Haïtien, Haiti’s second largest city, where American Airlines has held a monopoly since it inaugurated a 7,500-foot runway nearly four years ago. “The demand is there for travel to and from Haiti,” said Mark Kopczak, Spirit’s vice president of network planning. “We saw an opportunity here. The fares are pretty high and the services are pretty limited to Cap-Haïtien and we know the travel is difficult in the country.” The first flight will launch from Fort Lauderdale on Thursday with a no-frills, round-trip ticket costing $297 — although seat selection and bags are extra. And while flights will be limited to three times a week — Tuesdays, Thursdays and Sundays — the expansion is part of the low-cost carrier’s continuing push for a wider Caribbean reach. And it comes as Cap-Haïtien, once nicknamed “the Paris of the Antilles,” tries to recover its tarnished tourism brand. “A new airline is something very positive for the region,” Haiti Tourism Minister Colombe Emilie Jessy Menos said. “As the president said two months ago, the development of Haiti will start in the northern region.”

In 2020, Cap-Haïtien will celebrate its 350th anniversary, and its most iconic attraction — the large mountaintop fortress symbolizing the country’s slave revolution and liberation, the Citadelle Laferrière — will turn 200. Menos, who noted that she has approached JetBlue about the possibility of flying into Cap-Haïtien, said: “We want more airlines to come and discover our great city, and our country too.” Unlike Port-au-Prince, which opened several new internationally-branded hotels after the January 2010 earthquake, Cap-Haïtien has struggled to attract tourism investments despite high profile visits by Virgin Atlantic’s Richard Branson, fashion designer Donna Karan and former President Bill Clinton. Hillary Clinton also visited in 2012, when she was secretary of state, flying into the airport aboard a modified U.S.-government aircraft, the first large aircraft to land there in over a decade.

Rugged but reminiscent of New Orleans with its gingerbread construction and narrow streets, Cap-Haïtien and its surrounding countryside offer a walk through Haiti’s past. There is the ruin of the majestic Sans-Souci Palace, the royal residence of King Henri Christophe I, who fought in the American Revolution before helping to lead the Haitian Revolution. And then there is the fortress he built, the Citadelle, which recently served as the backdrop for Haitian-American singer Jason Derulo’s video for his song “Colors” — the official song for the 2018 FIFA World Cup.

The city’s congested and unkempt streets can be uninviting for tourists, but there has been a number of recent investments that have brightened the picture. In January, the city welcomed Satama, a new 60-room hillside hotel with enough conference space to accommodate 400 people, and a month later, the city reopened an improved $8 million coastal road. Financed by the World Bank, the two-lane, five-mile road links the village of Labadie to downtown Cap-Haïtien, and cuts travel time from 90 minutes to 30 minutes. Construction is also continuing on the new Marriott International, re-branded Habitation Jouissant. The expanded 100-room hotel will join Marriott’s Autograph Collections Hotels portfolio when it opens in early fall 2019. “It will be more luxurious than the Marriott in Port-au-Prince,” said hotelier Fred Béliard, who will blend the Jouissant’s current 13 rooms into the new earthquake-resistant design.

In addition to the Marriott project, Béliard’s Miami-based holding company, the Fatima Group, has transformed a private home into a luxury five-bedroom beachfont villa, Marquis Paradise on Labadie. “We put you in a boat and you can start drinking champagne until you get there,” Béliard said about the property that also comes equipped with a private chef. With less than 500 hotel rooms built to international standards in Cap-Haïtien, Béliard said “the market is open” and Spirit’s entry is timely. Bertrand Buteau, whose Satama hotel is now among several hotel properties his family owns, mostly in Port-au-Prince, said that he hopes Spirit’s presence provides a benefit beyond making it easier for members of the diaspora to visit family. “We hope Spirit will promote Cap-Haïtien and develop an interest among people to visit the city, which has many things to offer,” he said.

He said the decision to build Satama was partly based on emotion — his daughter and her children live in the city — but also made sense for business reasons. “I believe Cap Haïtien can be what Montego Bay is for Jamaica,” he said, noting that the walkable city has a lively night life for tourists and is relatively safe. South Florida’s Haitian population has increased between 16 percent and 24 percent over the past decade, Kopczak said, and an average of 750 travelers a day are ferried between South Florida and Haiti by Spirit — which has operated daily flights from Fort Lauderdale to Port-au-Prince for the past decade — American Airlines and JetBlue.  Cap-Haïtien and Port-au-Prince are 140 miles apart. That can take up to eight hours to drive — or require catching an internal flight with domestic carrier Sunrise, which is also eying the Fort Lauderdale-Cap-Haïtien route for expanded international service. “For those who want to go to the northern part of the country and not wanting to go through the experience of going through Port-au-Prince and doing that drive, there’s now another alternative,” Kopczak said. Buteau, the hotelier, can identify. “When I speak to my friends in the diaspora, all of them tell me the same story. ‘We would like to show our kids and grand kids parts of Haiti, but we do not want to go to Port-au-Prince.’”

Spirit’s bare economy fares — a carry-on bag costs from $26 to $65, while the first checked bag costs $21 to $65 — are attractive. But the airlines will have some educating to do with Haiti-bound customers accustomed to traveling with baggage, often a lot of it. “We are actively working on making sure that no one is surprised,” said Derek Dombrowski, Spirit spokesman. In addition to Cap-Haïtien, Spirit — which has drastically improved its on-time performance, according to data from the Bureau of Transportation Statistics — is also bringing its low fares to other Caribbean markets. In May, it will expand its U.S. Virgin Islands service from St. Thomas to St. Croix and will resume service to St. Martin, which like the USVI, is still recovering from last year’s devastating hurricane season. Spirit also recently reinstated daily flights to Kingston, Jamaica. “Our primary customer is … looking to save money when they travel, whether that’s for leisure or vacation or they are looking to visit friends and relatives,” Kopczak said. “The real value to the customer is having competition in the marketplace to drive the fares down and [provide] more options and more ways to get there. On average, the cost of getting down there will be less for everybody who wants to go.”