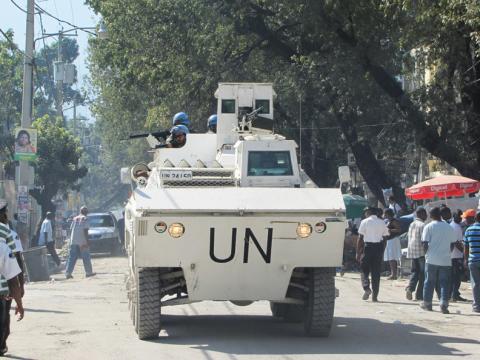 The Security Council is set to wrap up the U.N. peacekeeping mission in Haiti by mid-October after more than 20 years, in recognition of "the major milestone" the country has achieved toward stabilization following recent elections. The council is scheduled to vote Thursday on a draft resolution that extends the mandate of the mission, known as MINUSTAH, for a final six months during which the 2,370 military personnel will gradually leave. The resolution will create a follow-on peacekeeping mission for six months to be known as MINUJUSTH comprising 1,275 police who will continue training the national police force. It says the new mission should be operational when the old mission's mandate ends on Oct. 15.

The United States is currently reviewing the U.N.'s 16 far-flung peacekeeping operations to assess costs and effectiveness. U.S. ambassador Nikki Haley told the Security Council on Tuesday that thanks to recent elections in Haiti "the political context is right" for a new and smaller mission. The draft resolution recognizes the country's return to "constitutional order" and major steps toward stabilization following presidential and legislative elections. But it also recognizes the need for international support to strengthen, professionalize and reform the police — and to help the country promote economic development and face the "significant humanitarian challenges" following Hurricane Matthew which struck last October.

The draft reiterates the need for security in the country to be accompanied by efforts to address "the country's extreme vulnerability to natural disasters." Sandra Honore, the U.N. envoy for Haiti, told the council on Tuesday that "Haiti's political outlook for 2017 and beyond has significantly improved" following elections. This has opened "a crucial window of opportunity to address the root causes of the political crisis" that preceded the elections and address "the many pressing challenges facing the country," she said.

The draft resolution says that MINUJUSTH, in addition to helping train the police, should assist the government in strengthening judicial and legal institutions "and engage in human rights monitoring, reporting and analysis." It would also authorize the new mission "to protect civilians under imminent threat of physical violence" in areas where it's deployed and "to use all necessary means" to carry out its mandate in supporting and training Haiti's police.