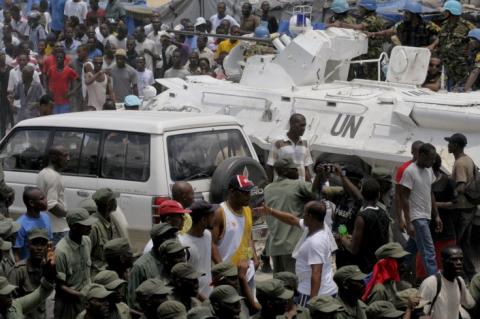 After more than a decade since its first peacekeeping mission in Haiti, the UN is considering removing its military personnel from the country, an official with the organisation said. The move could herald a larger plan to completely phase out its operations in the Caribbean nation. Head of the Department of Peacekeeping Operations, Herve Ladsous, has been leading an assessment of the mission in Haiti and indicated that the military force is "likely to disappear in the relatively near future".  "I think that when we look at the situation in this country compared to what it was a few years ago, we have made a lot of progress. Security is not perfect, but I think it is much better," he told reporters at the UN base in Port-au-Prince.

Minustah – the French acronym for the UN mission – was first set up in 2004 when the country became entrenched in political instability following a rebellion that led to the ouster of then-President Jean-Bertrand Aristide. In 2010 the UN increased its efforts following a devastating earthquake and then continued to help villages and towns affected by Hurricane Matthew, which hit the country in 2015.

However, the agency's peacekeepers have faced severe criticism with allegations of sexual abuse and misconduct. Troops from Nepal were also held responsible for the spread of cholera in the country through inadequately treated sewage water which was disposed in the Meille River – Haiti's biggest water resource. More than 10,000 people were killed from the epidemic and the disease continues to spread across the country. "Re-evaluation is especially appropriate in light of Minustah's slow, expensive and limited progress in its primary mission," Brian Concannon, head of the Institute for Justice and Democracy in Haiti, a charity that has worked with cholera victims, told Reuters.

Ladsous also agreed that a "reconfiguration" was required but believes that while the military unit should be removed, other departments of the mission were still required. "If the military component is erased... there is still a lot of work left to do on the police, on the law ... on human rights, on the status of women," he noted. Since the start of operations in 2004, the UN has deployed nearly 5,000 troops and police, at an annual cost of some $346m (£276m). On 7 February, they announced the launch of a two-year, $291m response plan with the government to reach more than 2.4 million people across the island. "With more than 98 per cent of Haitians exposed to two or more types of disasters, and over half of its population living in poverty, Hurricane Matthew has once more demonstrated Haiti's weakened ability to cope, recover and adapt to shocks from natural disasters," said Mourad Wahba, the Humanitarian Coordinator for Haiti, in the plan's foreword.