A New Push for Tourism in Haiti Against the Obstacles 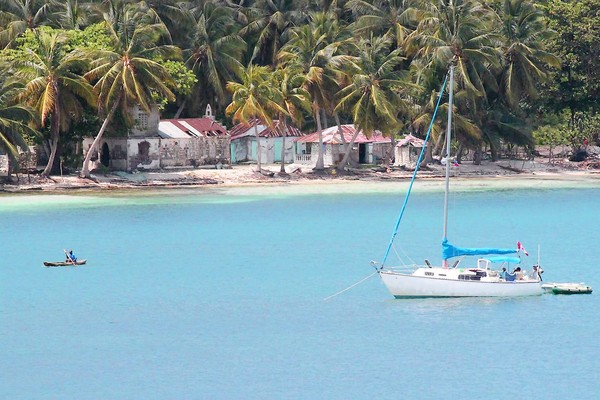 Below is an LA Times article about the difficulty and potential of promoting tourism in Haiti.  Every country in the Caribbean benefits from tourism to some extent.  Haiti's tourism industry could also grow (modestly) over time - with stability, more hotels, and hospitality training programs. Linkages to tourism agencies in the Dominican Republic could also open up cross-border tourism.  Thoughts on promoting tourism in Haiti?  Post your ideas below.

JACMEL, Haiti — "Vacation to Haiti/It nearly broke my heart." So rapped Miami hip-hop heavyweight Rick Ross in 2009, but the lyric could be current: Haiti is better known for its natural disasters and political turmoil than for its tourists. Now, however, a pioneering class of Haiti-loving entrepreneurs is investing time and money to change that. "People just have no clue," said Michael Capponi, a Miami nightclub and real estate tycoon who has set his sights on Haiti. "They know that it's an island, but they don't even know that it's an island with beaches. Yet building a tourism sector won't be easy.  The earthquake that struck Haiti in January 2010 destroyed much of the capital as well as this historic southern beach town, killing several hundred thousand people. Political stability and economic growth were hit as hard as Haiti's cinder block homes. Post-quake Haiti was again synonymous with disaster. Helping Haiti became a popular humanitarian cause; mission groups and aid workers flocked to the country en masse. And therein came a twist.

When they arrived, many aid workers became smitten with Haitian culture, rhythms and art. They embraced the tropical climate and color. "This catastrophe has helped people discover Haiti again," said Lorraine Silvera, owner of Lolo's, an upscale restaurant catering to foreigners on a picturesque beach outside Jacmel. So far, the main visitors to Haiti's tourist spots are aid workers and members of the Haitian diaspora, but businesses are hoping to expand to draw traditional tourists.  Forty-five minutes north of Port-au-Prince, the capital, is the Cote-des-Arcadins, a stretch of white beaches nestled at the foot of steep mountains. There the traveler will find Wahoo Bay Beach, a family-owned resort with lush gardens and a wide view of the turquoise sea. The Lemke family has invested in extensive renovations at the resort since October 2010. This year, Genevieve Lemke and her daughter, Jennifer, tried to promote a college "spring break" trip to Haiti, partnering with the nonprofit business marketing organization Brand Haiti. They had scheduled two trips for March but called them off when Prime Minister Garry Conille abruptly resigned in late February, spurring tension in the streets of Port-au-Prince and alarming would-be vacationers. "People abroad are still a little bit nervous about Haiti," Genevieve Lemke said.

Instability, both political and social, is one of the central impediments to Haitian tourism. And it has smothered hopes of building a tourism sector twice before. After an international exposition in Haiti in 1949, the country was termed the "pearl of the Antilles" through much of the 1950s. The brutal dictatorship of Francois Duvalier put an end to that. Tourism began to rebound under the loosened tyranny of the dictator's son, Jean-Claude "Baby Doc" Duvalier, in the 1970s, only to be crushed again with the onset of AIDS in the 1980s. Some believe that Haiti may now have another chance. Paul Clammer is writing the "Bradt Travel Guide for Haiti," due in November. It will be the first stand-alone, English-language guidebook to Haiti published since the 1980s. Clammer thinks the expressed interest in the book speaks to a potential "third big tourism wave." Entrepreneurs and investors are literally banking on it.  For instance, the budget for Capponi's project in Jacmel, including a boutique hotel, has ballooned from $700,000 to $2.5 million. Since his family founded Tour Haiti in 2004 in Jacmel, Jean Cyril Pressoir has worked for free. But he has his fingers crossed that the company will make a profit next year.

The Lemkes, meanwhile, don't know when they'll pay off their renovations at Wahoo Bay, but they still invest in upgrades every month. All this optimism is not without its challenges. Infrastructure for tourism remains minimal. International visitors must fly into Port-au-Prince's muggy airport and brave frenzied, cutthroat competition among porters vying to carry their luggage. Hotel prices are inflated because hoteliers have to cover the costs of private water sources, electrical generators to augment irregular power, and even private trash incineration. The service sector needs kick-starting. A hospitality training school in the Cote-des-Arcadins, funded by the Brazilian aid group Viva Rio, has yet to open, but it is already receiving urgent inquiries from hoteliers across the country frustrated by incompetent workers. To top it off, Haiti's business climate is notoriously lethargic. Capponi's boutique hotel, Le Village de Port de Jacmel, was scheduled to open in March. In May, the building stood half refurbished, inhabited by squatters, as Capponi struggled to get the government and skittish private investors to simultaneously commit to the project. Each group wants the other to go first.

The humanitarian disaster after the 2010 earthquake also created a dilemma for travelers: Who wants to sip a rum cocktail knowing that, just down the road, malnourished children are languishing in tents? To address this situation, "voluntourists" are being encouraged to take trips that divide time between helping Haitians and enjoying the island. But even this has its problems. Critics say a couple of days of volunteering has minimal effect on needy communities, not to mention the fact that volunteers performing manual labor undermines the local labor market. Yet visitors are still wanted, and needed. "The way to help the poverty in Haiti is to come to Haiti, eat Haitian food, drink Haitian rum," Pressoir said. Gaestel is a special correspondent.