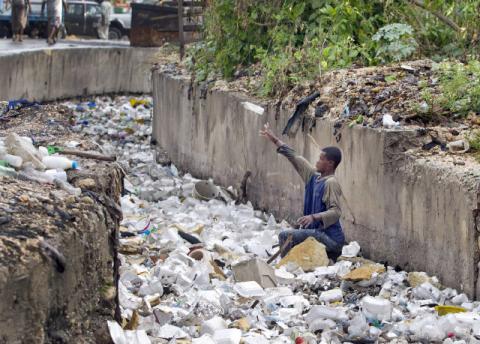 Pittsburgh-based polyester fiber and clothing maker Thread International PBC Ltd. is starting a three-year pilot project in Haiti to help street-level plastic bottle collectors by providing health care, education and job training services. Thread said in a Sept. 21 announcement that it will partner with outdoor apparel maker Timberland, computer maker HP Inc. and the Clinton Global Initiative. Together they will provide the equivalent of $300,000 in funding and in-kind services. The project is designed to help 300 waste collectors in Haiti, including 200 children, who collect plastic bottles from landfills, canals and streets. They said hope to be able to take the project to other countries. “The very bottom of the supply chain is where people are the most vulnerable,” said Thread CEO Ian Rosenberger, in a statement.

The effort will work with a Haiti-based non-governmental organization, Team Tassy, which provides job services, schooling and medical care, and the L’Association des Collecteurs d’objet en Plastique, or ACOP, an association of 13 Haitian entrepreneurs who operate waste collection centers in the region around the capital, Port-au-Prince. Thread spokesman Ben Pawsey said the most economically vulnerable families in Haiti face tremendous pressure to have children  work collecting waste materials in order to survive. “In Haiti, many families rely on plastic collection as a sole source of income and often face the difficult choice of involving children in this work in order to ensure the security and well-being of the family,” Thread said in its statement.

Pawsey said Thread does not own or operate any plastic bottle collection centers in Haiti, but instead works with its supply chain there to collect plastic bottles and turn them into clean PET flake in Haiti. That flake is then exported to the United States and Canada to be processed into fibers or recycled plastic. Thread, a Certified B corporation, says it provides socially responsible fibers and fabrics and manufactures clothing from that fabric. Thread also sources material in a similar way from Honduras. Thread’s fabrics are being used by Timberland for a line of shoes and bags made from recycled PET collected in Haiti and Honduras, scheduled for release in 2017.HP will use the recycled PET from the project to manufacture inkjet cartridges. In its most recent annual report, Thread said it exported 440,000 pounds of plastic waste in 2015, down from 666,000 pounds in 2013, as it said it was shifting resources into fabric R&D. But it said it expects to export more plastic waste in 2016. Pawsey said its business model has been complicated by extremely low prices for oil and recycled plastic. He said, for example, that Thread decided to pay more for its PET flake than the market price to help support its network of suppliers. The firm said it’s received $3.5 million in start-up financing, including $2.8 million in a June 2015 round led by Pittsburgh-based venture capital firm Draper Triangle.