Female Entrepeneur is a "Professor of Toilet Paper" in Haiti 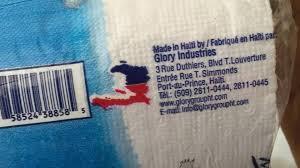 It comes in packaging with labels like Joy and Glory, a nod to Haitians’ deep spirituality and to a time when all she had was prayer after losing her fortune in a milk-distribution deal turned sour. Now Myrtha Vilbon, who spent nine years shuffling between her Bible and her computer after seeing her business slip away, is rebuilding from scratch with the most basic of products — toilet paper. “A great majority — about 40 percent of the population here — cannot afford toilet paper,” said Vilbon, the owner of Glory Industries, a company manufacturing toilet paper in Haiti. “Toilet paper is a luxury.”  In a year’s time, Vilbon, 58, has gone from a woman unable to get banks to support her $2.4 million toilet-paper-making venture to one where she can choose her own lenders. And this week, she’ll be among four Haitian entrepreneurs attending the Global Entrepreneurship Summit at Stanford University in Palo Alto, California, with President Barack Obama. The seventh annual summit takes place Wednesday through Friday, and Obama will address the group on the final day.

More than 5,000 entrepreneurs from around the world submitted applications, but only 700 were chosen to attend. All ​four​ of the Haitian enterprises — Glory Industries, SWITCH, SURTAB and ​ACOD​ ​— represent new ventures that are tackling the challenges of launching a business in a country with a complex business environment.  And while Haiti’s current economic indicators are the same or worse than in 2008 when the country experienced food riots — and now there is political instability, as well — U.S. officials say the U.S. Agency for International Development-funded programs like LEAD are helping.  “There is progress,” a U.S. government official said. A year and a half ago, Vilbon, struggling to get her project financed, entered LEAD’s rigorous business plan competition on the advice of a family friend and won. She used the resulting $200,000 U.S. government grant as leverage to raise more than $1 million in additional investment.  “With the funding from USAID, financiers grew a little more faith,” she said. “I was even dictating the terms, when before I couldn’t even get one penny to put into the project.”

While access to credit for women entrepreneurs in Haiti is scarce, the country is one of the worst for doing business. It ranks 182 out of 189 on the World Bank’s annual 2016 Doing Business Index, and even worse — 188 out of 189 — for starting a business.  As for the ease in getting credit, the ranking isn’t that much better. It ranks 174 out of 189. “I knocked on doors; many financial doors and opportunities weren’t offered to me,” said Vilbon, who had 37 years of business experience and a reputation for turning a profit. “A woman in industry is not so well viewed, so there was a little bit of a gender problem.” Sitting in her expansive office where her low-cost brand of toilet paper occupies a conference table overlooking the factory floor, Vilbon strongly believes that financial institutions saw her project as lower-risk because of LEAD’s strict review.  How Vilbon ended up in the toilet-paper business is an example of bouncing back — and of one woman’s determination not to let shrewd foreign negotiators and Haitian cut-throat business tactics get the best of her.

Born into a family of entrepreneurs, Vilbon learned about business from her father, Max, who was the maker of one of Haiti’s most well-known candies, Menthes Alta. He sent her to the United States at age 14, where she eventually earned a bachelor’s degree in business administration at St. John’s University in New York. On her return to Haiti, she briefly joined the family’s confectionery business. Soon, however, she opened a boutique confectionery store where she was buying candies and cookies wholesale and reselling them to both wholesalers and retailers. “I was in contact every day with the little merchants, sellers, and that made me happy,” she said. “I saw the business grow.”

When cheaper imported candies began undercutting her profits, she traveled to the ports in Port-de-Paix to learn more about the problem. The experience would prove valuable decades later, giving her insight into the world of the Madan Saras, the Haitian market women who resell products on the streets to the country’s poor masses. Today, these women push her most popular and affordable toilet-paper roll, TouTou NI — which means naked in Creole — in places that trucks and buses can’t reach. Smaller than the average toilet-paper roll, the brand costs the equivalent of 16 cents and has enough paper for about 10 uses.  When confectioneries became unprofitable, Vilbon became the local agent for a Dutch brand of milk, Bella Holandesa. She later added other grocery store items from Brazil and France. “I built an empire and I made a lot of money,” she said. “But I soon started losing my products either by mergers or by other people taking over the brands.”

Soon, she was left with only one product, Bella Holandesa. That’s where Vilbon received her toughest lesson in business.  After 17 years, she lost her distribution deal with the product, unwittingly signing away her legal ability to collect on compensation and over $1 million in back commissions, she said. The experience sent her to her Bible and eventually her computer, where she soon became “a professor in toilet-paper making.” “I felt I would be working for a good cause. I was contributing to better hygiene for the people of Haiti,” she said. “I thought it was a product that would be in great demand and be of great service to the community, and that would be the cheapest thing to invest in, in production.” At a time when many Haitian businesses are laying off workers and one other toilet paper company, Tendress, was recently forced to shut down its operations, Vilbon says she’s having the opposite experience. “We’re trying to get more funds to buy a new set of machinery to be able to satisfy more needs, to reach out to more communities with our papers,” she said. She has plans to scale up, expanding into another warehouse.

Walking the warehouse floor, Vilbon proudly points out her eight registered labels that now occupy about 5 percent of the Haitian market, which is dominated by toilet paper imported from the Dominican Republic. She notes that she knows every step of the operations. She has created over 100 jobs, and about 70 percent of the workers in her factory are women. “I would like to empower every woman to believe in themselves,” she said. “When women do something, they focus more on it because they know they have something to prove. Even in their subconscious, they invest themselves.”  She preaches perseverance, patience and a passion to achieve. “Every bad thing that happens to me in life somehow brings me something positive. I am today an attorney. I went back to school and after five years graduated last September and got a law degree.” The path to success isn’t a straight line, Vilbon said. “It’s a broken line. You are going to fall, you are going to stumble. But don’t get discouraged.”