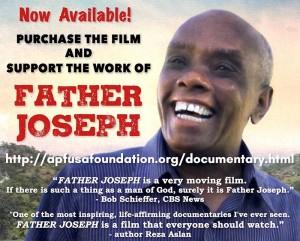 "I try to empower the poor, young people, woman, and peasants. We want to help everyone recognize that they have a lot of gifts, even though they are poor, to give to the community by working together as a body. We can grow together as human beings and complete each other, and learn from each other. We can become bridge-builders and peacemakers, for ourselves, for the others, and for the world."

Father Joseph was born to farmers in the rural community of Fondwa – mountains, dirt paths, and little infrastructure.  He was the first in his family to graduate from college, going on to become an accountant and a Catholic priest (Spiritan Holy Order) in 1982.  These were turbulent times in Haiti.  Any individual or organization who empowered the poor majority was seen as a threat to the few and the rich.  Like many activists during these years, Father Joseph had friends and colleagues who were killed for trying to mobilize the poor.  He founded the Peasant Association of Fondwa (APF) in 1998 followed by the University of Fondwa in 2004 - which is unique both for being Haiti’s first rural university and the only one with a focus on service learning.

The documentary does an excellent job of tracing the history of Father Joseph, Fondwa, and major initiatives such as the development and expansion of Fonkoze.  Media coverage of Haiti often fails to focus on what communities are doing for themselves and/or suggests missionaries and aid workers are needed to mobilize communities. Haiti is full of heroes, Father Joseph amongst them, in a country where being a champion of the poor often means a dramatically shorter life-span. Father Joseph knew he would not receive help from the Haitian government.  He didn't wait for funding or partnerships to organize and empower people in rural areas. The funding and partnerships came because they mobilized.  It is a much better model than an international NGO trying to organize communities. As Haitians say, "Chita Pa Bay" (Sitting around doesn't give/do anything).

If you would like to become involved, getting the word out about the documentary is a good start.  It is available on Netflix or can be purchased (DVD or On Demand) through the Floating Worlds website. After the earthquake, APF launched a “Raising Haiti” fundraising initiative to rebuild. Through the website, you can sign up for updates and/or make a donation which will be well-used.  Your thoughts on the documentary are welcome in the comments section below.