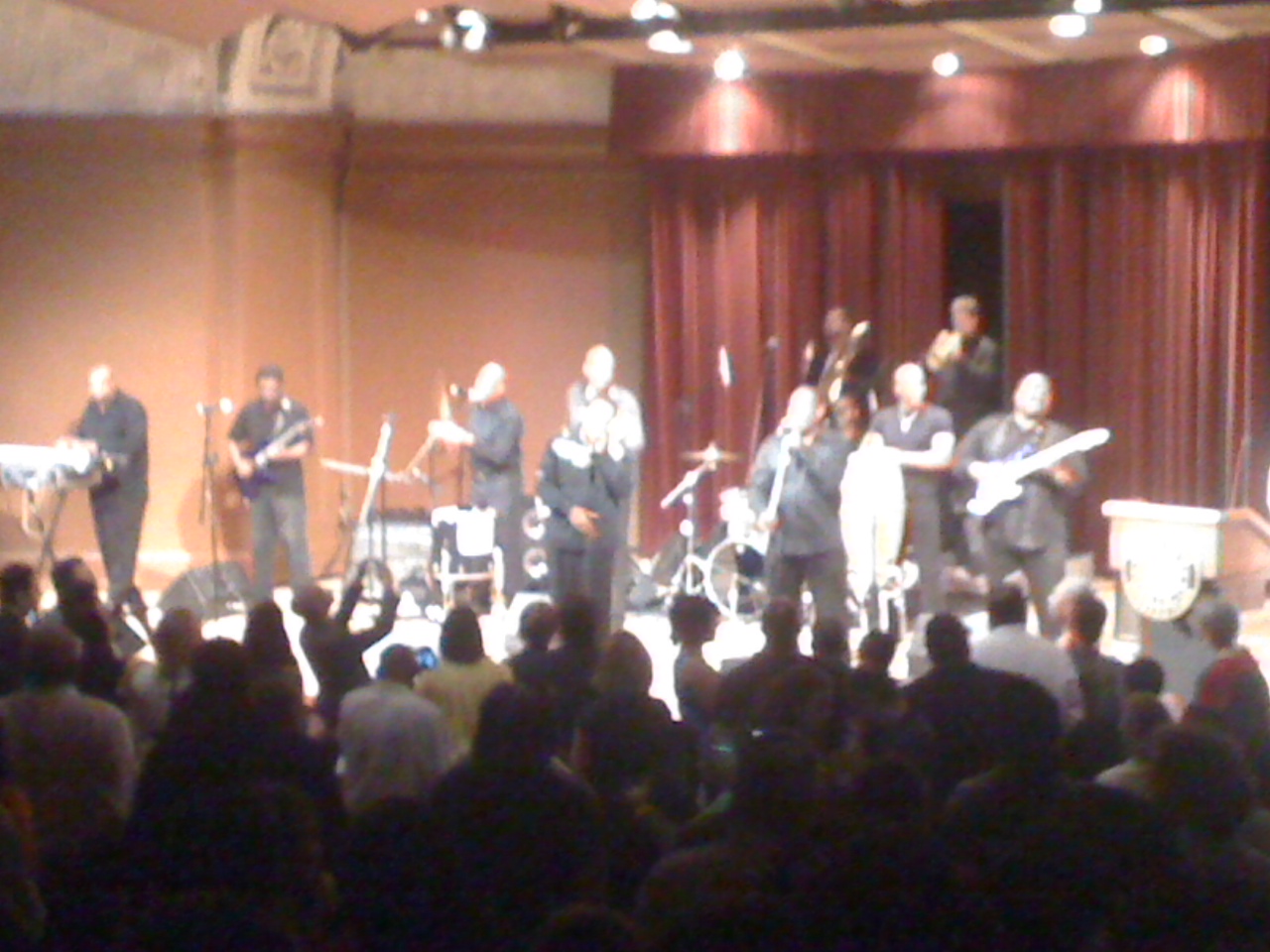 To say the Dominican Republic and Haiti have a difficult history is an under-statement.  Despite historical (and largely artificial) divisions, there is much the two countries share.  This includes a love of music, dance, rum and a good fet/fiesta.  The Smithsonian Institution’s Latino Center and the Haitian and Dominican Embassies teamed up yesterday to hold a concert celebrating friendship among two peoples who share an island and a future.  Enriquillo Tejada y Los Clarinetes Magicos and Tabou Combo represented their countries well.

Enriquillo Tejada y Los Clarinetes Magicos got things started by performing a classy set that mixed merengues, boleros, and Latin jazz.  It started slow but heated up toward the end and got the audience on their feet.  My Spanish is limited but at various points, the band emphasized that Dominicans and Haitians should treat each other as the brothers and sisters they are.

Tabou Combo started their set with a kompa version of the Haitian national anthem.  After, they kicked off a high-energy and exuberant set.  It was nice to see Haitians and Dominicans having a good time together, dancing in the aisles and in front of the stage.  There was lot of good energy, but unfortunately, the event was marred by an unneccesary interruption.  At the end of their set, Tabou Combo was preparing to launch into “Haiti Cherie” when five or six security guards came up on the stage and told Tabou Combo to stop playing.  Ten minutes of heated argument ensued between the security guards, embassy staff, and Smithsonian representatives while the audience was left wondering what was happening (apparently an issue of too many people).  Tabou Combo took it in stride.  Ultimately, they were told that they could play one last song.  Tabou Combo cranked up the volume and jammed for about ten more minutes, although they and the audience no doubt would have liked to go on.

Despite some members getting on in years, Tabou Combo remains a band that can play all night.  Given more time, I would have liked to see the two bands play together.  Years ago, when Haiti was one of the headliners of the Smithsonian Folk-life Festival, I caught an impromptu performance of musicians from Haiti, Mexico, and other Latin American countries.  The musical styles were different, but complementary, and got everyone moving.

At the conclusion of the event, the facilitators asked the audience to remember the sense of unity that the audience felt enjoying the music of Hispaniola.  Haiti and the Dominican Republic need each other, albeit in different ways.  Beginning with the Preval Presidency, the Haitian and Dominican governments began to build a more trusting and collaborative bilateral relationship.  The Dominican government and civil society certainly deserve credit for the solidarity it demonstrated with Haiti after the 2010 earthquake and for its ongoing efforts to contribute to reconstruction.  However, more attention is needed to building trust between Haitian and Dominican individuals and communities.  Cultural diplomacy can be a bridge to promote respect and understanding – in Washington DC, Haiti, the Dominican Republic, and elsewhere.

The Smithsonian Latino Center: An Educational Outreach and Research Center of the Smithsonian Institution focused on ensuring that Latino contributions to art, science, and the humanities are highlighted,  understood and advanced through the development and support of public programs, scholarly research, museum collections and its affiliated organizations across the United States.

Background: The Smithsonian Institution is a trust instrumentality of the United States founded in 1846 in response to the will of Englishman James Smithson who bequeathed the whole of his property to the United States of America “to found at Washington, under the name of the Smithsonian Institution, an Establishment for the increase and diffusion of knowledge.” In the 160+ years since that time the Smithsonian has grown to include 19 museums, the National Zoological Park, and 9 research centers located in Washington, DC and its metropolitan area, New York City, Cambridge, MA, Fort Pierce, FL, and Panama. The Smithsonian employs approximately 6,900 staff, has over 137 million collection objects, and in 2006, hosted over 23 million visitors at its core museum locations and over 150 million visitors to its public websites.

In 1997, the Smithsonian’s Board of Regents established the Smithsonian Latino Center (the “SLC”), a pan-institutional unit that works with the entire network of Smithsonian museums, research centers, the National Zoo and over 140 affiliates nationwide to foster understanding and appreciation of contributions made by Latinos to history, society and culture.  SLC promotes the inclusion of Latino contributions in Smithsonian programs, exhibitions, collections and public outreach. It does this in three principal ways: (1) It funds cultural, historical and scientific projects across the Smithsonian that represents significant Latino achievement; (2) It develops and manages educational programs, products and outreach; and (3) it promotes public awareness of Latino programs at the Smithsonian museums and its affiliates across the United States.